Who Wins?: 100 Historical Figures Go Head-to-Head and You Decide the Winner! (Spiral bound)

END_OF_DOCUMENT_TOKEN_TO_BE_REPLACED 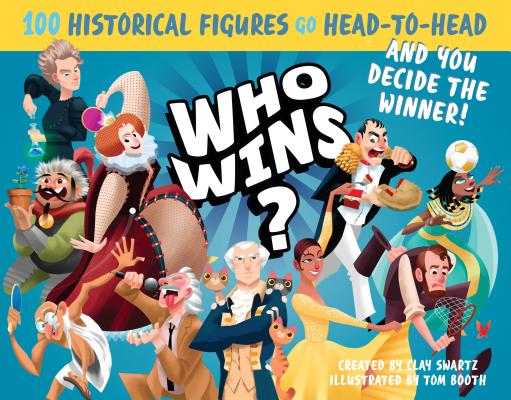 Let’s say Charles Dickens challenges Mother Teresa to a lightsaber duel—they’re both equally fit, so will his superior artistry overcome her advantage in bravery and leadership? Or who wins karaoke—Nelson Mandela or Jane Austen? They certainly both have a way with words, but Mandela’s over-the-top courage might take the day.

Mixing and matching 100 historical figures in 50 competitive categories, from Ping-Pong to climbing Mount Everest, Who Wins? turns history into a compelling game, which means kids learn while having fun in the process. Each of the famous people is given a short bio and ranked in six categories—bravery, leadership, artistry, wealth, wisdom, and fitness.

And because there are no right answers, the reader decides, and in the very act of deciding and justifying the answer, real learning has taken place.

CLAY SWARTZ is a writer and associate editor at Boys’ Life magazine.

Tom Booth is an author and illustrator living in Brooklyn, New York.

"This genius concept is so much fun that your kids won't even realize they are learning about fascinating historical figures, from Nelson Mandela to Marie Curie, and honing their debating skills in the process." — Barnes & Noble Kids Blog

"It has brought us hours of fun, laughs, crazy scenarios, and learning." — Kidliterati.com