The Things We Keep: A Novel (Hardcover)

END_OF_DOCUMENT_TOKEN_TO_BE_REPLACED 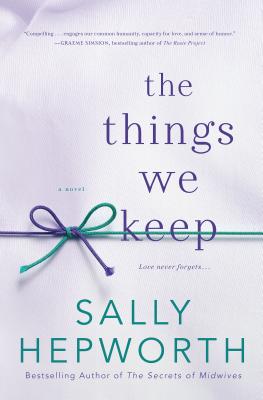 By Sally Hepworth
Email or call for price.
Out of Print

“Anna Forster is facing everyone's worst nightmare -- early onset Alzheimer's disease. Anna may not remember the people she meets, but readers will not forget Anna. With startling insight and intense compassion, Hepworth creates a character who watches her intellectual world implode while at the same time, experiencing a new romance. The Things We Keep is a love story and a tribute to life, a rare gem that shows that what the heart knows cannot be forgotten. Bravo!”
— Pamela Kinger-Horn, Excelsior Bay Books, Excelsior, MN

Anna Forster is only thirty-eight years old, but her mind is slowly slipping away from her. Armed only with her keen wit and sharp-eyed determination, she knows that her family is doing what they believe to be best when they take her to Rosalind House, an assisted living facility. But Anna has a secret: she does not plan on staying. She also knows there's just one another resident who is her age, Luke. What she does not expect is the love that blossoms between her and Luke even as she resists her new life. As her disease steals more and more of her memory, Anna fights to hold on to what she knows, including her relationship with Luke.

Eve Bennett, suddenly thrust into the role of single mother to her bright and vivacious seven-year-old daugher, finds herself putting her culinary training to use at Rosalind house. When she meets Anna and Luke, she is moved by the bond the pair has forged. But when a tragic incident leads Anna's and Luke's families to separate them, Eve finds herself questioning what she is willing to risk to help them. Eve has her own secrets, and her own desperate circumstances that raise the stakes even higher.

With huge heart, humor, and a compassionate understanding of human nature, Sally Hepworth delivers a page-turning novel about the power of love to grow and endure even when faced with the most devastating of obstacles. You won’t forget The Things We Keep.

Sally Hepworth is a former event planner and human resources professional. A graduate of Monash University in Melbourne, Australia, Sally started writing novels after the birth of her first child. She is the author of Love Like The French, published by Random House Germany. Sally has lived around the world, spending extended periods in Singapore, the U.K., and Canada, and she now writes full-time from her home in Melbourne, where she lives with her husband and two young children.

Praise for The Things We Keep:

"A poignant testament to the immeasurable and restorative power of love.... Sure to appeal to fans of Jojo Moyes, Jodi Piccoult, and Lisa Genova; book clubs will be lining up." —Library Journal, starred review

"Hepworth’s debut, The Secrets of Midwives, was critically acclaimed, and it’s always a formidable task to impress readers with a second novel. But with The Things We Keep, Hepworth proves that literary lightning can indeed strike twice." —BookPage

"A compelling read that touches on important themes, not least the different forms that love may take. Sally Hepworth succeeds by engaging our common humanity, capacity for love and sense of humour." —Graeme Simsion, New York Times bestselling author of The Rosie Project